Q&A with Professor Cheryl Praeger AM 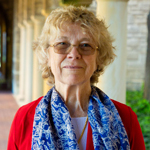 Q: Can you tell us a bit about your background and upbringing including your early education?

A: I was the eldest in a family of three. My father worked for a bank in southern Queensland, so we moved every few years. I attended various schools in country towns through to my first year of high school. Then my family moved to Brisbane and I completed the rest of my schooling at Brisbane Girl’s Grammar School. From there I went to the University of Queensland. Then between my third and fourth year, I won a vacation scholarship to the Australian National University (ANU) in Canberra. There I did a maths research project supervised by Professor B H Neumann. It was the first time I had ever been given an open-ended problem, where there were no known solutions.

I wrote up my results and published them in an international mathematics journal and from that experience I really decided I wanted to do a PhD in mathematics.

Q. A career advisor once told you that girls didn’t do maths and you should consider a different career. What went through your mind when you heard that?

A: The advisor told me I should be a nurse. I just couldn’t imagine I could be a nurse and I’d gone there specifically to find out how I could study mathematics. So, I was really upset but then I became really angry.

Eventually, my mother found out you could go to the university itself and find out about courses. We found that there was a superb honours course in mathematics and my physics teacher in school suggested I could also do honours in physics, which I then did.

Q. Where did your passion for mathematics come from?

A: I realised in high school that I enjoyed mathematics very much, but I didn’t know anything about creating new mathematics at that stage. For me, it seemed like maths helped to explain how the world worked somehow.

Then at the ANU that summer I discovered the excitement of doing something new and looking at unsolved problems and working them through to a solution. I also got a scholarship to do my doctorate at Oxford and there I was introduced to the area of mathematics that’s really been my passion ever since. I describe it as the mathematics of symmetry.

Q: What does it mean to you to win the Prime Minister’s Prize for Science?

A: I think it’s really something incredibly special for me because the Prize reaches out across science and across the country. I hope that the visibility of the Prime Minister’s Prize for Science attracts younger people to consider possibilities in STEM, especially young girls to imagine there is a space for them if they want to follow this path.

Q: What challenges have you faced in your career?

A: Having children and keeping on working that was a huge challenge, even with my very supportive husband John. I had the possibility of taking a short maternity leave and coming back. Most of my colleagues, and they were mostly male, were very supportive of me trying to do this. Especially, becoming professor at that age with such young kids was a real challenge.

I remember I was invited onto a new Federal Government education committee called the Curriculum Development Council and I actually said no at first, because I was still breastfeeding my second son. After some encouragement I agreed to attend the first meeting without needing any commitment. I found it very exciting, and was glad to join the Council. I knew I had to accept opportunities and I did accept almost everything that came along. Although making that decision to say yes was quite challenging at times.

Q: What would you say to girls looking to pursue a career in STEM?

I would be totally supportive and enthusiastically encourage any young woman who wishes to pursue a career in that area. Australia needs bright young people to get involved in STEM and half of those young people are women, so we need many more young women in STEM.

Q: What’s next for Cheryl Praeger?

A: I have quite a few maths projects that I am working on. Also, I serve on several committees, including chairing the Women in Science and Engineering special committee of AASSA, the regional network of science academies in Asia, and the Committee for Freedom and Responsibility in Science, a standing committee of the International Science Council.