From partnerships to prosperity

This is an excerpt of Professor Terry’s address to the National Press Club on 10 March 2021. 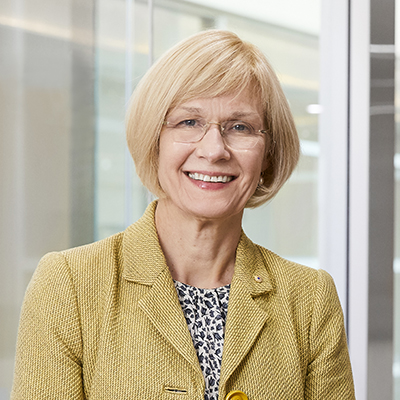 As a nation, we have a proud history of invention.

Think of the life-changing impact of IVF, the cervical cancer vaccine, the bionic ear or spray-on skin.

Each of these inventions emerged from research conducted at our universities.

Australia is a research powerhouse.

In the 2020 Global Innovation Index, Australia ranked 13th out of 131 economies for innovation inputs.

That’s a solid result – reflecting the strength of our research institutions and infrastructure; and our human capital.

But Australia fell down the list to 31st when it came to measuring innovation outputs.

And our overall innovation ranking was 23rd.

The only way of interpreting this is that we are global leaders at the front-end of innovation – in research and discovery science.

But, as a nation, we’re under-performing at the back-end of innovation.

Not enough of our research is being translated to drive social and economic benefits for the nation.

Not enough of our inventions are being commercialised in a way that creates new industries and jobs, here, in Australia.

In short, we’re missing opportunities to make our own future.

In raising this topic, I’m not suggesting that Australia’s translation pipeline is empty.

Nor am I saying that Australia’s innovation economy is stagnant.

Quite the opposite is true.

Indeed, across the country, new university-industry precincts are now emerging with great ambition and vision.

These precincts put industry and academia in close proximity – and this helps to spark new possibility.

Julie Wagner, of the Brookings Institution, is one of the world’s leading experts on innovation precincts.

Following her 2017 visit to Melbourne, she penned an article with Bruce Katz, that said:

“Australia’s universities have the research chops to become a driver of innovative, market-led growth.”

CSL – the company manufacturing the Oxford / AstraZeneca COVID-19 vaccine – is a shining light in the world of research commercialisation.

CSL’s global centre of R&D excellence is located in Melbourne – surrounded by a critical mass of universities, medical research institutes and hospitals.

Last year, on this stage, I pointed to the many other innovation precincts that are now appearing in our major cities.

Lot Fourteen in Adelaide, home of the Australian Space Agency.

The Murdoch Health and Knowledge Precinct in Perth.

The Ecosciences Precinct in Brisbane, home to the Translational Research Institute.

There’s the new Nowra Industry 4.0 Hub, a collaboration with the University of Wollongong.

The Woodside Monash Energy Partnership that has emerged out of the successful Woodside Future Lab.

And James Cook University has recently opened its Ideas Lab, with the vision of igniting innovation in Cairns.

There are many examples of companies built on Australian research know-how – they are either making or shaping the future.

Indeed, 85 per cent of the world’s solar cell capacity can be traced back to the breakthroughs of UNSW researcher Martin Green.

In Geelong, a company called Carbon Revolution is manufacturing light-weight, carbon fibre wheels based on technology out of Deakin University.

Another example is the Pain-Chek app that uses facial recognition technology to more accurately assess the level of pain felt by people suffering from dementia.

The app is based on technology developed at Curtin University and it’s being used to better manage the pain of residents in over 800 aged care facilities, globally.

And close to my own university, UQ, the Brisbane-based firm Tritium has established itself as a global leader in electric vehicle recharging technology.

It’s a great success story, grounded in innovation, that grew out of a chance encounter between three like-minded UQ students competing in the World Solar Car Challenge.

Tritium now employs over 300 people in Brisbane, has a significant base in Amsterdam, and accounts for over 20 per cent of the European market in EV chargers.

But we can’t build a better future on chance encounters.

Instead, we need to keep building an innovation culture and ecosystem – that helps us identify and incubate the next Carbon Revolution, the next Pain-Chek app or the next Tritium.

Thankfully, there appears to be a groundswell of activity, right now – across governments, universities and industry – committed to seizing this opportunity.

But we need more than good intentions.

What we need is new levels of collaboration.

The Government recognises this.

They’ve identified it as a priority that will help drive the economic recovery from the pandemic.

Last October, the Government made the centrality of research to our future absolutely clear with a $1 billion dollar injection to help protect and support the world-leading research capabilities sitting in our universities.

Around the same time, on this stage, the Prime Minister launched the Government’s Modern Manufacturing Strategy.

That was an important, timely speech.

In his speech, the PM talked about the lessons from Singapore, Canada and Germany – nations that have succeeded in advanced manufacturing by playing to their strengths.

As the PM put it:

“A lesson is don’t try to do everything. It’s all about alignment, across different levels of government, with industry and with the research and education sectors.”

It’s the same point that former Chief Scientist Ian Chubb was making when he said: “It takes three to tango”.

Industry needs to be less risk averse – and embrace the potential of R&D, at scale.

And universities need to engage meaningfully with the real-world, and push at the boundaries of disciplinary knowledge.

As Minister Tudge said, and I quote:

“We want and need our universities to play a bigger role. To not just produce brilliant pure research, but to work more with businesses and governments to translate this research into breakthrough products, new businesses and ideas to grow our economy and strengthen our society.”

On behalf of the nation’s universities, my response is: “Hear, Hear”.

We agree with the Minister that our university researchers must be at “the beating heart” of Australia’s economic comeback.

By working in closer partnership with Government and industry, we want to play a greater role in lifting productivity, boosting the diversification of our economy, and creating new jobs.

But it’s critically important to our future prosperity that we continue to support our basic research.

That early-phase discovery science involves backing our researchers to follow their ideas, wherever they lead.

If we don’t support basic research, there will be nothing to translate or commercialise.

And we won’t be in a position to drive our future.

With that in mind, we welcome the consultation paper released recently by the government’s Research Commercialisation Taskforce.

And I want to commend Jeff Connolly, CEO of Siemens, for so ably leading that taskforce.

Our universities will be bold and ambitious in their responses.

We will seek out new ways of engaging and collaborating.

We will look to make the cultural changes within our institutions to further support and incentivise research translation.

We will assess the effectiveness of the different models of technology transfer in use across our institutions – and we’ll seek to optimise how we apply them.

We will offer advice on what has worked overseas – from innovation voucher schemes, to knowledge transfer schemes.

And we will apply the expertise of our researchers to respond to the challenges faced by government and industry.

Read the full speech on the Universities Australia website.